St. Patrick’s Day is Tuesday, March 17th. With the last name of Flynn, I would be remiss not to pull out my “Kiss Me, I’m Irish” tee, grab a good ‘ole Stout, and to dive into some research on this long-standing, always fun, sea of green, everyone’s Irish, beer-drinking day.

This year, St. Patrick’s Day is on a Tuesday! Well, we’re happy (or not so work happy) to report that St. Paddy’s is one of those holidays that is celebrated on the day it falls – whenever that may be – and we promise, your favourite Irish Pub or local drinking-hole will follow suit – it’s just the way it is. Kingsville is no exception – with three breweries in stumbling distance would you expect any less?  (Details on that will follow in a future post).  So, clear your calendar, make arrangements to cover your work (or practice your best sick call), get the kids off to March Break camp, and we will see you on Tuesday.

So next, let’s review everything you need to know about this holiday which honours of all things Irish, everything green, and beer, beer, and more beer…

The Man, The Myth, The Legend 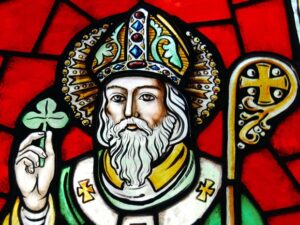 Believe it or not, St. Patrick is a man – a patron saint of Ireland. He is said to have died on March 17, in or around the year 493. The story goes that St. Patrick was kidnapped at the age of 16 by Irish pirates and taken as a slave. He spent six years in Ireland but eventually fled and became a well-respected priest in the Catholic Church. He eventually returned to Ireland to work at converting the Irish to Christianity – surprisingly it actually went very well.
St. Patrick is also credited as the man who rid Ireland of “snakes” (since there likely have been no snakes on Ireland since the last ice age – the “snakes” that St. Patrick banished were likely pagan worshipers of serpent Gods at the time).

Did you even know that there are no snakes in Ireland? What?!? That’s certainly the Luck o’ the Irish!

March 17th, the date of St. Patrick’s death, became a feast day in the Catholic Church and is a celebration to mark the importance of this man in the history of the Church. St. Patrick is said to be buried under the Down Cathedral in Downpatrick, Ireland.

There likely isn’t a person out there that doesn’t know that St. Patrick’s Day involves drinking beer (sometimes even the green variety). So, if St Patrick’s Day was originally created for a Saint, then why the beer you ask? Well, St. Patrick’s Day lands smack dab in the middle of Lent, which means that Catholics h 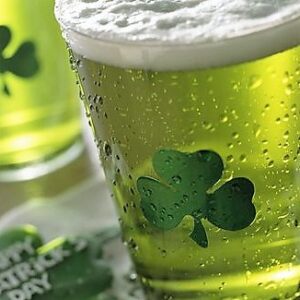 ave an excuse to disregard the restrictions of the Lent period for one day of feasts and celebrations in honour of good, ole’ St. Patrick. It’s not hard to see how this day would become one to let loose and go hog wild, and why drinking beer is inextricably linked to the holiday.

It Isn’t Easy Being Green

One of the most recognizable traditions for any St. Paddy’s Day celebration is that green is a must – green clothing, green hats, green hair, green, green. green. Many would argue that the green can’t stop there and that every competent and deserving pub has green beer ready to go. Adding green food colouring to beer is nothing new and in fact, it was first “invented” in New York in 1914 by a Dr. Thomas Hayes Curtin. He added a drop of wash blue to beer, and out came a green beer that’s still a popular trend over a century later. Luckily, we now use harmless food colouring instead of the possibly toxic wash blue, and it doesn’t alter the taste of the beer in any way – as we all know that life’s too short to drink bad beer.

Eat, Drink and Be Irish

St. Patrick’s Day has changed significantly since it was first created in the 5th century. Now, this holiday is celebrated by more than just the Irish and has become an excuse for all to be merry and drink a ’plenty. With beer flowing, green as far as the eye can see, and people celebrating like only giant leprechauns can, March 17th is always a memorable no matter how you spend it. 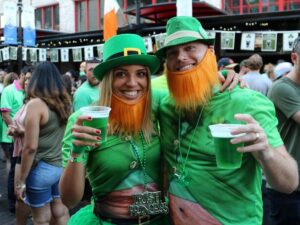 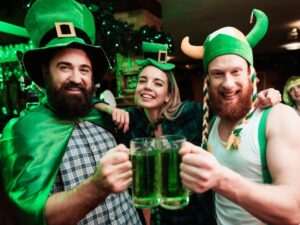 The morale of the story…you don’t have to be Irish or religious to celebrate St Patrick’s Day and you definitely don’t have to be a beer drinker (although if you are an Irish beer drinker, you’ll be guaranteed to snag a few extra smooches or free pint or two). All you need is a beer in hand—preferably green—and a readiness to honour Saint Patrick and celebrate like only the Irish can.

P.S.  If you do indulge and need a place to crash – I know this amazing place!